On the southern window of Brno’s Church of St. James, the same church that houses Europe’s second largest ossuary, one sculptural element of the impressive structure seems somewhat out of place: an indecent little two-headed man cheekily displaying his bare butt to the world. This little guy is called “Neslušný mužícek” – the Indecent Little Man. 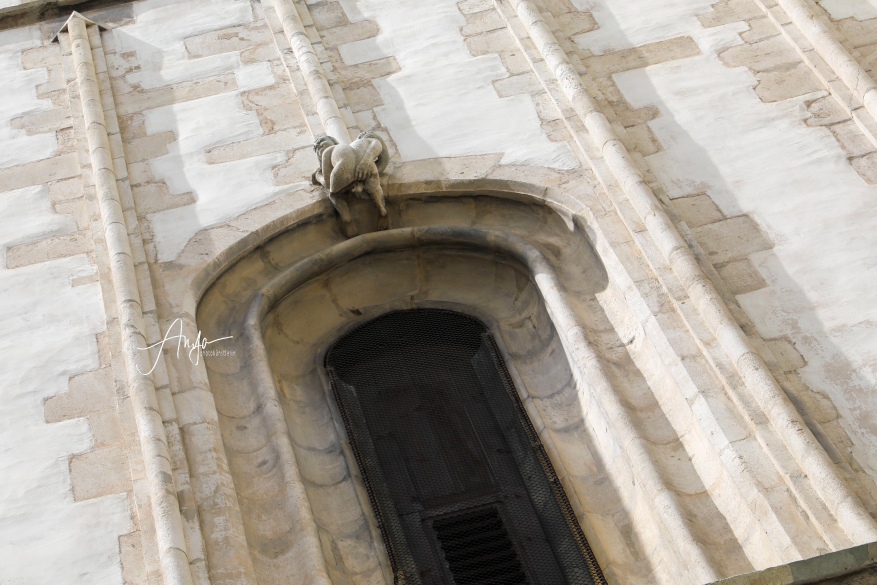 There are two stories attributed to the little man, both involving the competition between the Church of St. James and the Cathedral of St. Peter and Paul on nearby Petrov Hill, to build the higher churchtower.
According to the first, the two churches, each financed by a family from either side of town, were about to be finished. The bottom directed towards Petrov hills means that Saint James’s church won the competition, because its tower is 94 m high, while Cathedral’s tower is about 10 m lower, at “only” 84 m high. So, the naked man and his bottom were added on as a middle finger from the winning church to the losing one. 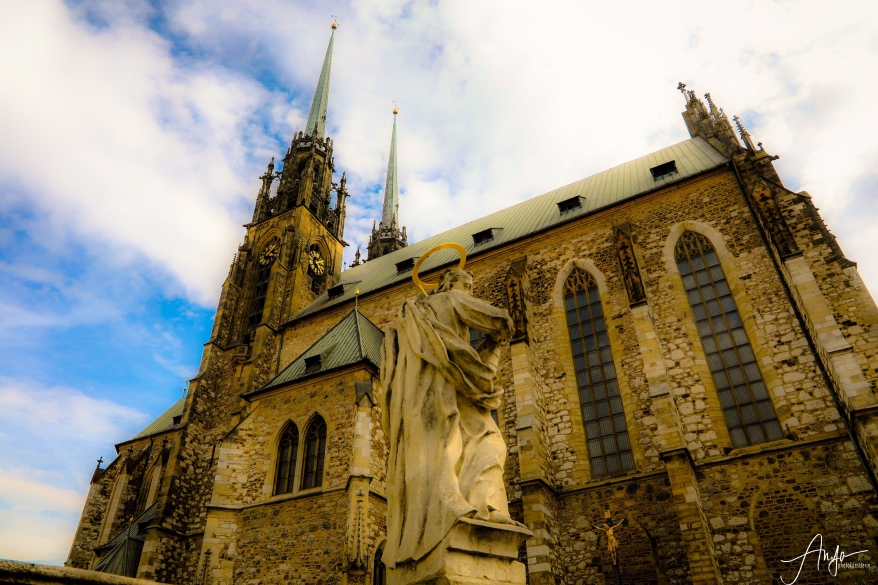 Cathedral of St. Peter and Paul

The second story is that the richer lords on Petrov Hill and the poorer burghers down in the city had always been rivals. So when they both decided to build a place of worship the competition was on to see who could build the taller steeple.
The financiers of the Cathedral of St. Peter and Paul were jealous of their competitors because, though Petrov Hill was a wealthier part of town, the stonemason on the Church of St. James was one of Europe’s finest. In addition to his skill, he was an efficient and well-liked laborer, and as such work on St. James was going considerably faster than on the cathedral. The people in the city managed to entice this master builder who had worked on the construction of Strasbourg Cathedral to build their church, and the builder was fast, efficient and very popular also among the burghers.
Instead, on Petrov Hill, construction of the Cathedral of St Peter and Paul was very slow.
Using power, influence, and money the lords of Petrov Hill schemed to have the Church of St James builder expelled from the city. Before the builder left, he begged to be allowed to finish the work he was doing on the Gothic arch window. When his work was finished he packed up his tools and left, leaving behind a little thank you for the men on the hill who had expelled him. The bare butt cheeks face directly towards the Cathedral of St Peter and Paul.

However, some historians says that both stories are apocryphal, and that the unusual sculpture is only a strange but not uncommon piece of Gothic adornment. You choose which story you prefer! 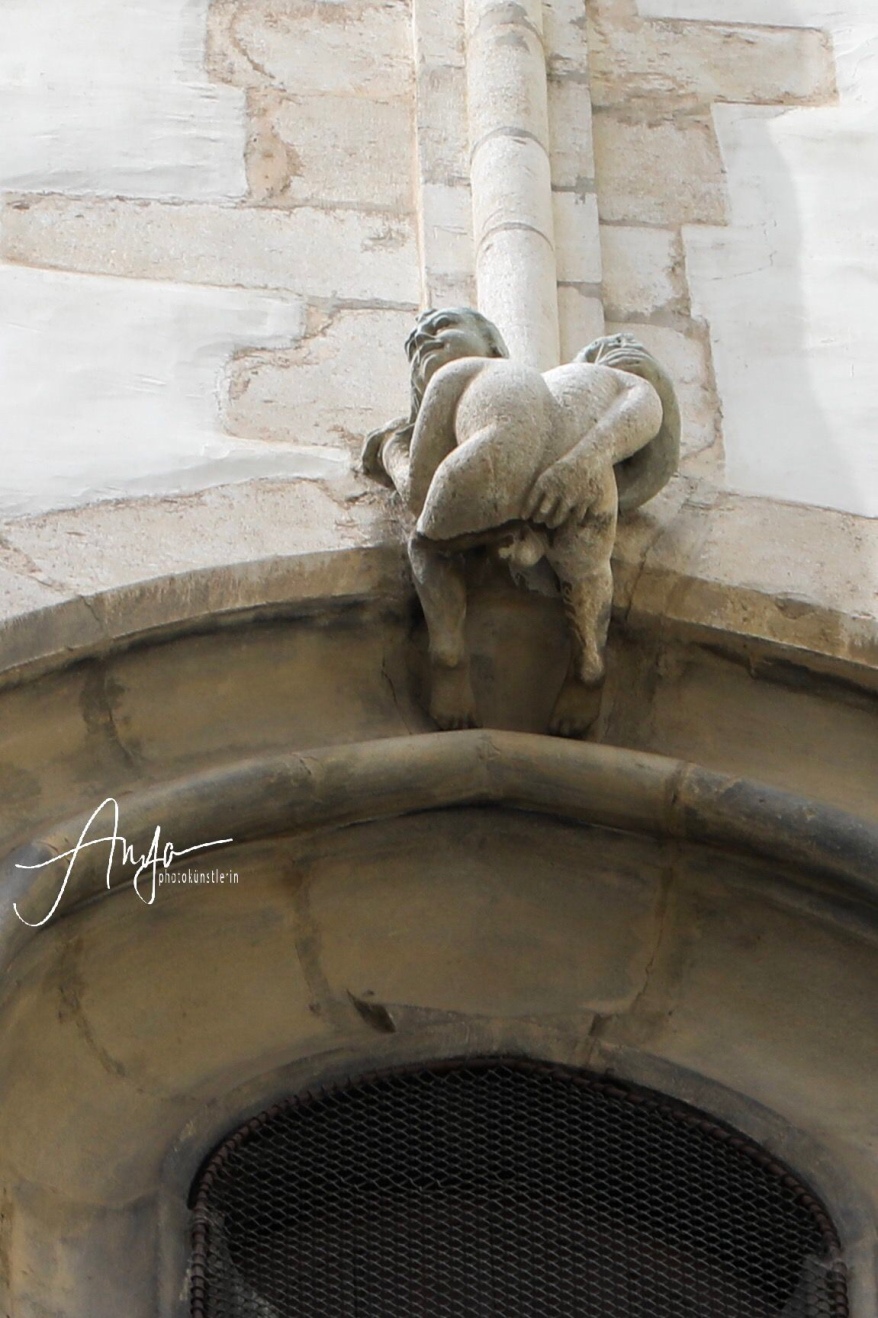 Given that the COVID-19 is still spreading at alarming speed across the world, including Asia, the Asian Volleyball Confederation (AVC) canceled all indoor and beach volleyball competitions at the continent […]

The one-time CEV European Championship and FIVB World League winner with the Russia volleyball National Team, Nikolay Pavlov, ended his career at the age of 38. The veteran opposite switched […]

Kurek officially back to Japan after 3 years

The japanese club Wolfdogs Nagoya announced that their new member for the 2020/21 season is the Pole superstar Bartosz Kurek! The MVP of the last FIVB World Championship, in which […]

The setter of the Bulgaria volleyball National Team, Georgi Seganov, was tested positive for COVID-19. The presence of the coronavirus has been detected at the two-month camp of the Bulgaria […]

Some clubs in the Italian volleyball Championship proposed the postponement of the start of the new season, given that it’s uncertain when their foreign players will join them. And Lucarelli […]

Spiridonov continues his career in Qatar

Against the odds, Panathinaikos (who faces these playoffs without the Serbian opposite Starovic) wins with a clear 3-0 Game 1 of Final on the Olympiacos field (even if they still […]