Aguscello, the asylum of ghost children

This place has all the features to make it one of the place of the most classic among legends and ghost stories: an uncertain past, the innocent spirits of children victims of horrendous abuses, and an atmosphere due perhaps more to an improper care of the living rather than the maledictions of the dead. This place is near Ferrara, Italy, exactly in Aguscello, a small fraction of the city known to most of the local people only for the tradition, and testimonies about one the most sinister and haunted in Italy.
Interesting is the legend that for years is handed down here, and many people that loves ghost stories and macabres believe. What i write here, therefore, it has nothing official with the official history of this place but it’s interesting read and know myth and legends too about places that i love visit and photograph.
Staying to tradition, what happened in the 30 years of the asylum activities, was really terrible: the building was run by nuns who did not particularly care about the children. The testimonies of those who lived through those years tell of very heavy physical and mental tortures. For example, in the back of the building there was a pigsty, and apparently it was not used only for pigs. A pain that still filters through the walls and shakes the conscience of those who went on a visit to former mental hospital Aguscello. Not remains a lot of the equipment, and walls, room and all building is vandalized, a d all it is related to the sudden abandonment of 1970. And as usual, however, since it is orally passed down legends, the escape from Aguscello reasons are not completely clear.
There is no uniformity about the theories that justify the disappearance of children in the asylum during the last days of its existence. The most popular hypothesis speaks of a fire, accidental or perhaps not, that had killed all children, locked up by nuns on the top floors of the asylum.
The disturbing version, speak about a child, Filippo Erni, who was suffering from a severe form of schizophrenia, and mentally exhausted from the rigid and oppressive educational methods of the nuns, would go mad, killing some of his fellows before being locked up in the last floor of the building. From the only window in the room would be launched in despair, finding the death. Just the soul of Philip Erni was sighted over the years by the curious Ghost Hunters that go here. They described it like a child of about 12 years old, blond, grim expression running around Aguscello garden of which is imprisoned for eternity. A third hypothesis about the closure of the mental hospital and the death of all its guests is the outbreak of a serious viral epidemic, and after buried the bodies in a close wooded area in front of the asylum, nuns would have run away. This site exist since 1870, when Pareschi brothers bought the lot in a public auction on the 1st of April. In 1896, a document certifies that the property passes into the hands of Mr.Lombardi, who exercises the usufruct for 12,000 lire/year under the concession of Bishop Enrico Grazioli. The deeds of this period (1900-1933) certify that the clinic Aguscello changes its owner every 3 years. I speak with a old man that live here, and i discovered something about the first owner of this place: Mrs. Amelia Guerra, wife of Dr. John Bernardi, who trasformed the structure a hospital for tuberculosis patients.(Up until then was a private residence by the previous owners). In 1940, it was sold to the Italian Red Cross, which turned it into a psychiatric hospital for children under 13 years old.
Reconstructing the history of Aguscello is not easy , because the italian Red Cross administrated the pedagogical for 30 years, until its sudden abandonment which took place in 1970. About this period, the official documentation of the structure, that includes the medical records of young patients too, is kept in the archives of the provincial committee Ferrara, available to anyone who wish to do an investigation about this.
Aguscello is undoubtedly a place where it is easy to be fascinated, but collapsedfloors and stairs disused does not allow you to explore it completely. Especially the top floor, where according to the legend the children would be locked up, is absolutely off-limits, and it’s literally a suicide to try to achieve it. 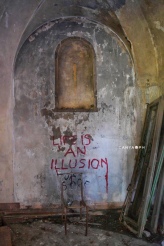