Hidden away on a wall of the New York City Police Department Headquarters there is a mysterious window. It is embedded in the wall, and made of an ancient brick which doesn’t match the ones surrounding it, and it is set with a row of ominous, rusted iron bars. It is thought that this is the remains of a terrible prison dating back to the Revolutionary War that stood on the same site: the infamously brutal Sugar House Prison.
Now hundreds of New Yorkers pass it daily, hurrying to and from business and regular life, never once stopping to read the plaque beneath the bars. Usually the memorial draws attention only from curious tourists and from New Yorkers with a passion for their city’s history.

The plaque underneath the iron-barred window explains that this window was originally part of the five-story Sugar House built in 1763 at the corner of Duane and Rose Streets. However, during the occupation of New York (1776-1783) by the English, the Sugar House was commandeered by the Redcoats and repurposed as a prison for American prisoners of war, civilian collaborators and private citizens, suspected of helping the patriots.
According to local sources, the Sugar House Prison was a place in which sanitary conditions were literally horrible and starvation was a constant threat, so its evil reputation was well earned, and its death toll unbelievably high. In addition, It is estimated that over 17,500 prisoners died in these conditions, more than twice the number of the death on the battlefield.
Sugar houses proved ideal prisons for the British: another on Liberty Street held around 500 wretched prisoners. According to a first-person account of conditions within the sugar houses by an ex-inmate, published in the New York Times in 1852, “Its appearance was dark and gloomy…..prisoners in an emaciated, starving, wretched condition, their numbers being constantly diminished by sickness and death.”
After the War, many prominent families moved uptown and the character of the neighborhood changed for the worse. It became a slum area, and the old Sugar House was regarded with superstition. Many tales were told of wraithlike figures seen behind the barred windows, and of ghostly hands stretched out to midnight passersby and for well over a century the deserted warehouse was judged to be haunted.

However, there is some doubt as to the origins of the peculiar window preserved in the wall on Duane Street. According to a recent recent research by Professor Edwin G. Burrows at Brooklyn College reported in 2013, the sugar house on Duane and Rose continued to operate also during the occupation.
What is really interesting is that when the old Sugar House was demolished in 1892, someone had the foresight to preserve this window which undoubtedly looks prison like, and it was incorporated into the wall of the new Rhinelander building, a 11-storied loft building.
When that too was demolished in 1968 to make way for the present day NYPD headquarters the old window was again preserved in the wall of the brutalist architecture of Police Plaza.
Peculiarly enough, a section of the wall from the ancient sugar house, with an identical window embedded in it, is located to Van Cortlandt Park in the Bronx. If the origins of the strange window hidden away on the wall of the NYPD building are debatable, what is without any doubt is the horrific conditions of the British Sugar House prisons, and the thousands of revolutionaries who died there, many of whom are rumored to haunt the memorial still today. 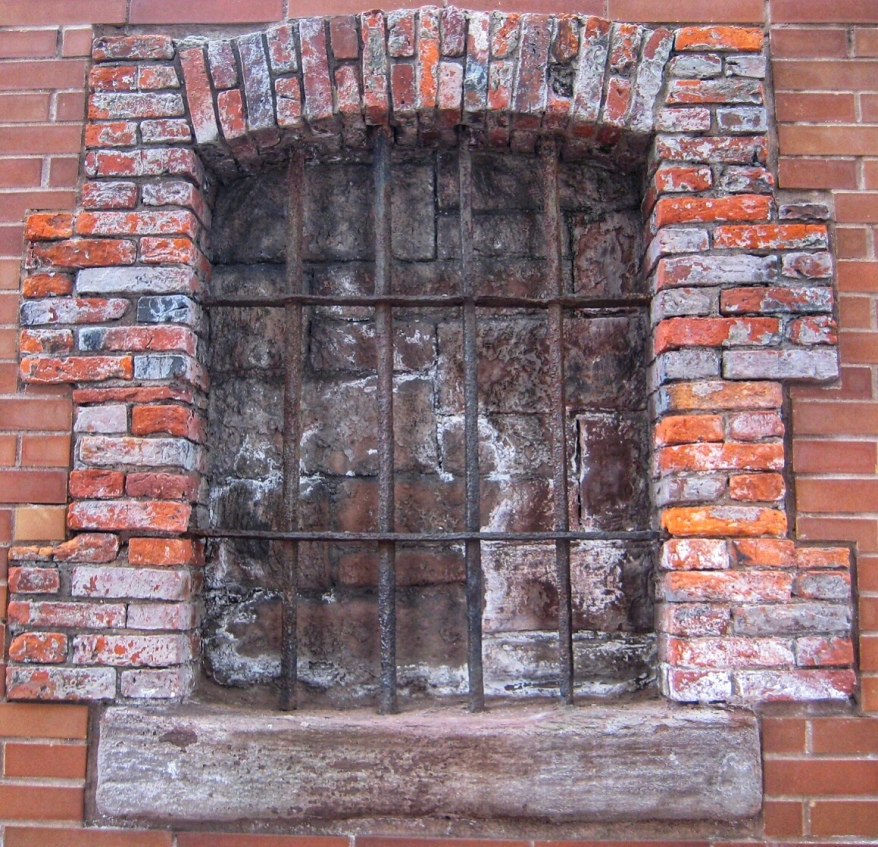