The Tacoma Narrows Bridge at the time was the third-longest suspension bridge behind the Golden Gate Bridge and the George Washington Bridge, and was opened on July 1, 1940. A little more than four months later, on November 7, it collapsed into Puget Sound, the complex estuarine system of interconnected marine waterways and basins along the northwestern coast of the U.S. state of Washington.
The Narrows Bridge, which spanned the Tacoma Narrows strait between Tacoma and the Kitsap Peninsula in Washington State, not far from Thornewood Castle of Lakewood and its ghosts, was conceived with a design flaw that caused it to roll and sway in high winds. Even during construction, in September 1938, this fun engineering mistake was obvious and workers nicknamed the bridge “Galloping Gertie.” 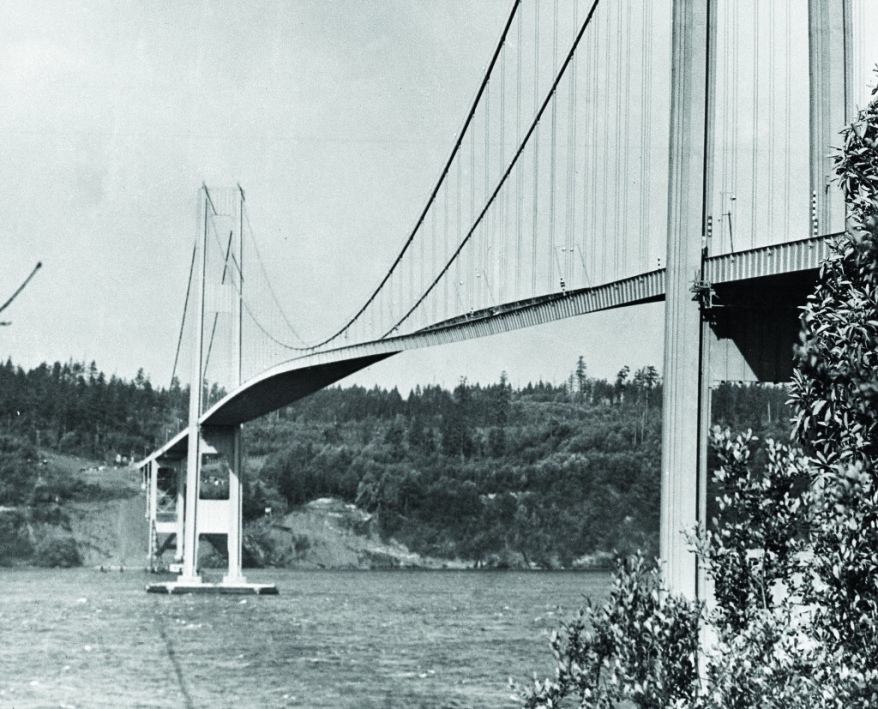 The common justification for the bridge collapse was that the bridge’s resonant frequency matched the frequency of the wind, which set the bridge on an ever, increasing oscillation. Now is known to be false because it seems the real culprit was a phenomenon called aeroelastic flutter, and though the idea of a feedback loop between the air and the movement of the bridge is correct, it had little to do with the natural frequency of the bridge. 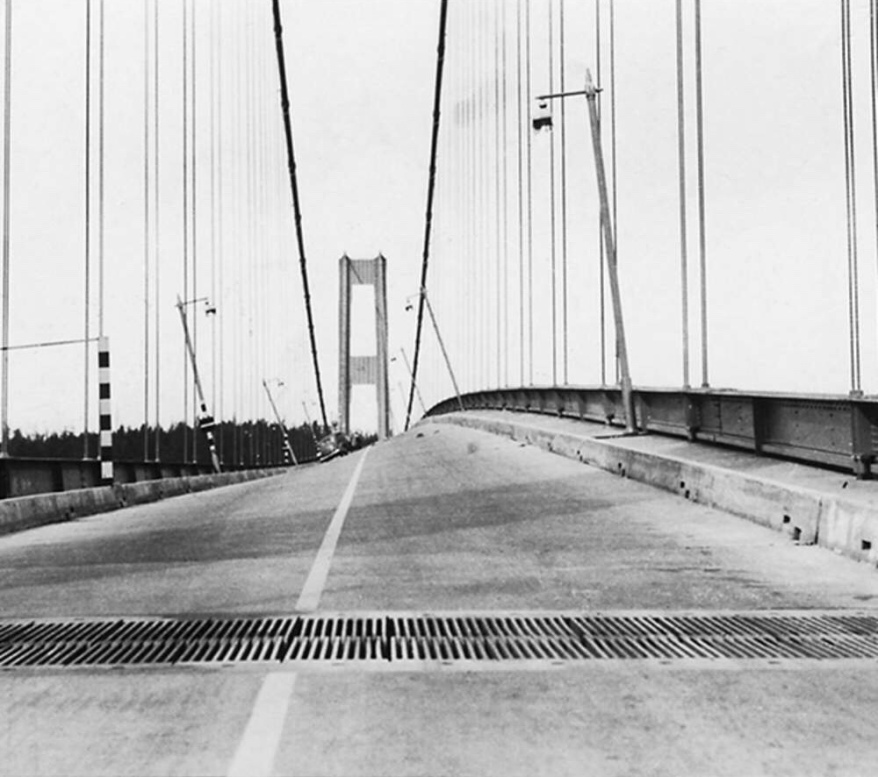 Of course the people on the bridge that day didn’t bother to think about physics. A survivor, Leonard Coatsworth, was the last person to drive on the bridge.
“Around me I could hear concrete cracking. I started back to the car to get the dog, but was thrown before I could reach it. The car itself began to slide from side to side on the roadway. I decided the bridge was breaking up and my only hope was to get back to shore.” He said.
“On hands and knees most of the time, I crawled 500 yards [460 m] or more to the towers… My breath was coming in gasps; my knees were raw and bleeding, my hands bruised and swollen from gripping the concrete curb… Toward the last, I risked rising to my feet and running a few yards at a time… Safely back at the toll plaza, I saw the bridge in its final collapse and saw my car plunge into the Narrows.”
Luckily nobody died when the bridge collapsed on November 7, 1940, the only victim was his cocker spaniel named Tubby, too frightened to allow itself to be rescued. Tubby died when the bridge fell and neither his body nor the car was ever recovered.

The bridge was deemed a total loss and following the collapse, the United States’ involvement in World War II delayed plans to replace the bridge. The portions of the bridge still standing after the collapse, including the towers and cables, were dismantled and sold as scrap metal. It took the state of Washington about ten years to rebuild the Narrows Bridge, this time designed to ensure that a similar disaster would never happen again. The newly rebuilt bridge was opened on October 14, 1950, longer and wider than the original.
Today the remains of the original Narrows Bridge are in much the same place they fell and the wreckage has created an artificial reef currently on the National Register of Historic Places. Since the collapse, the bridge has been used as a cautionary tale for engineering students. In many physics textbooks, this event is presented as an example of elementary forced resonance: the bridge collapsed because normal speed winds produced aeroelastic flutter that matched the bridge’s natural frequency. The collapse boosted research into bridge aerodynamics-aeroelastics, which has influenced the designs of all later long-span bridges.

Thanks to my brother, first source of this article, all verified by Wikipedia. Interesting images of bridge collapse also Here. Images from web.