Kūčios, the traditional Lithuanian Christmas dinner, is held on December 24th every year. And hosting kūčios is no small feat: this meal can take up to a week to prepare. For Lithuanians, the holidays are about spending time with family, so a week-long meal prep is certainly a great opportunity for families to get together and is likely why the tradition has persisted still today.

Many people fast during the day, and also Kūčios meal shouldn’t contain any meat.
Often an extra place is set for a family member who can’t come to the meal or if a family member has died during the past year, and sometimes a candle is lit to remember family members who died. Some people believe that dead family members come and join the family round the table.
At the center of the table there is a plate of Christmas flatbread wafers (Lithuanian: Kalėdaitis): one wafer for each person at the meal. In some parts of Lithuania the wafers have the scene of the birth of Jesus on them.
The meal starts when the first stars can be seen in the night sky and If it’s cloudy, the head of the family decides when the meal will start.
The wafers are offered to each person at the table and Christmas greetings are exchanged. Sometimes an apple is also cut into as many people at the meal and is shared. A custom that remember the apple eaten in the Garden of Eden. 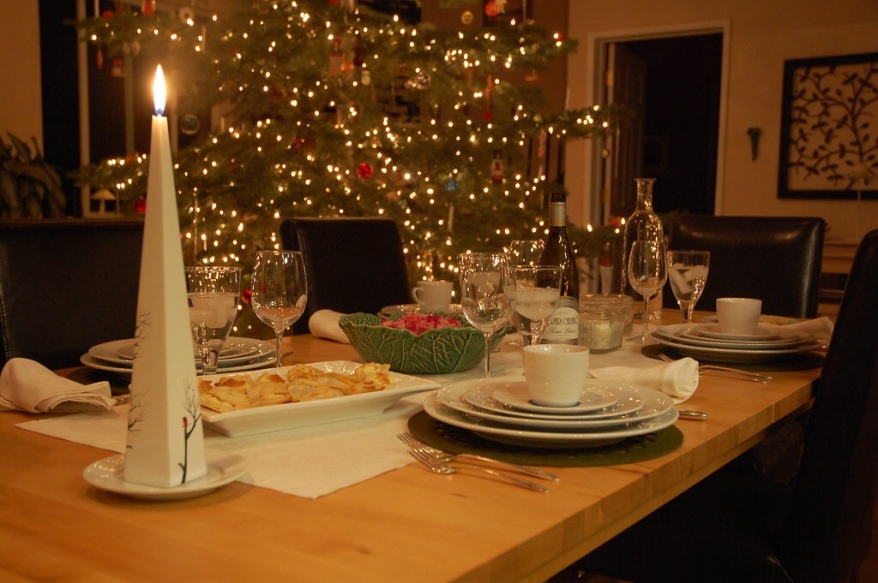 Originally kūčios had nine dishes. It was a pagan practice that later expanded to 12 dishes (one for each apostle) when it was appropriated by the Christian church.
No meat, dairy, or hot food are a part of this meal. Instead, it includes fish (often herring) kūčiukai (small sweet pastries, in photo below) normally soaked in poppy milk, kisielius (a drink made from cranberries), dried fruit soup, beet soup (often with mushroom filled dumplings in it), vegetable salad, mushrooms, boiled or baked potatoes, sauerkraut, a kind of wheat porridge with honey and bread.
Other items you might see on the menu are herring served in a tomato, mushroom or onion based sauce, smoked eel, vegetables such as potatoes, sauerkraut and mushrooms, bread or cranberry pudding.
After the meal (or between the main and sweet courses) there might be a visit from Santa Claus, the “Old Man of Christmas” (Lithuanian: Kalėdų senelis) with presents and when the presents have been exchanged, children often go to bed and the adults might go out to Midnight Mass (Bernelių mišios, which means Shepherds’s Mass).

Italy: Perugia, Modena and Padova victorious in Round 17

Poland: Warszawa break 9-game winning streak of Jastrzębski to stay on the top!

VERVA Warszawa ORLEN Paliwa swept Jastrzębski Węgiel in the derby of Round 17 of 2019/20 Polish Plusliga regular season. They recorded the 15th victory in 16 matches and today the […]

Cucine Lube Civitanova prevailed over Itas Trentino in the Italian derby of the 2020 CEV Volleyball Champions League. As a result, Lube remained undefeated in the competition after beating SuperLega […]

France: Sete destroys Nice in the last match of Round 17

The last game of Round 17 of the French league was played today. In the low ranking duel, Sete literally destroyed Nice in straight sets in front of their home […]

Italy: Piacenza and Monza ok in the advances of Round 17

France: Chaumont beat Tours in the big match of Round 17. Wins also for Rennes and Toulouse.

The winning streak of the reigning champions of Tours stops at 10, falling at home against Chaumont. The main star of the match is the American international middleblocker Stahl who, […]